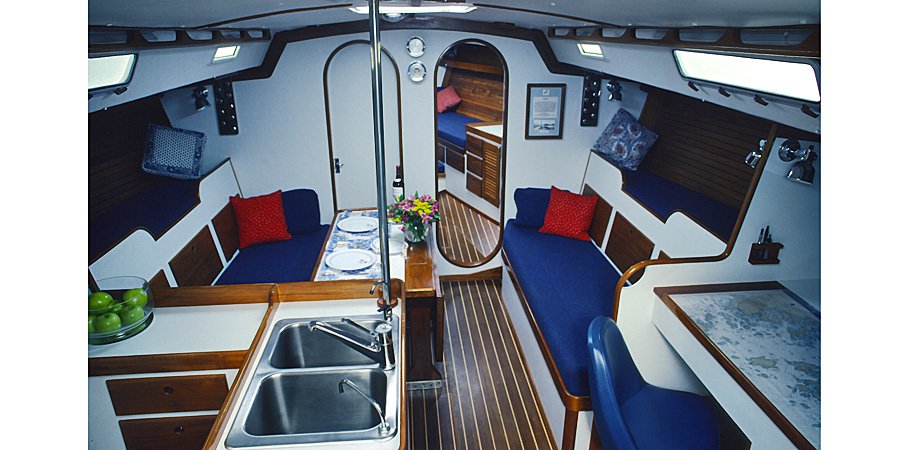 Portsmouth (R.I.) December 13, 2002 -- Duane and Mary Minard, crew of J/44 Quest, were honored with a US SAILING Arthur B. Hanson Rescue Medal for rescuing a solo sailor on Long Island Sound, after his boat caught fire from a gas engine explosion. Peter "Rudi" Millard, a member of US SAILING's Safety at Sea Committee (SASC), made the presentation at the Cedar Point Yacht Club Annual Awards Banquet, held on November 9 at Cobb's Mill Inn (Weston, CT).

The Rescue Medals recognize exemplary acts seamanship, but the award process is also a vital part of US SAILING's effort to gain more education about rescues at sea. The data and stories of award nominees are studied carefully by the SASC for the common practices that contribute to, or deter from, the success of a rescue operation.

The incident on Quest took place on Long Island Sound, on Sunday, June 2, 2002, off Fairfield (CT). Duane and Mary Minard were on the return leg of a weekend cruise--sailing in 30 knots of wind and 3-foot seas--when they noticed smoke from a distant sailboat at 4 PM. Besides this lone sailboat, the Sound was empty of other boat traffic.

A 41-year-old man was making a solo delivery in his newly purchased, gasoline powered Tanzer 28 when the engine exploded and his boat caught fire. The solo skipper first called 911 on his cell phone and then abandoned the boat onto its dinghy. But the sailor could not keep the dinghy upright, and it swamped. The sailor hung onto the dinghy while in the water, with his PFD on in chilly 60-degree water. The air temperature was 70 degrees.

The Minards headed towards the smoking boat and found the victim about 300 feet away from the boat. Unable to reach the Coast Guard on their handheld radio--and not wanting to go below to use the ship's radio and lose visual contact--they called 911 on a cell phone. They doused their sails and approached under power.

The Minards deployed their Lifesling but could not get it close enough to the dinghy, and the victim did not want to let go of the dinghy. The Minards held position upwind, and extended their own dinghy down to the victim. When he grabbed a hold, they pulled him in to their stern ladder and hauled him aboard. Westport Marine Police arrived about this time. Police boarded the burning vessel, extinguished the fire, and piloted the boat when a commercial salvor arrived.

The Minards got the victim out of his wet clothes and warmed him as they returned to Cedar Point. He was suffering from mild hypothermia. Once there, while Duane Minard put their boat away, Mary Minard took the victim to her home for a hot shower, food, and to call for a ride.

US SAILING congratulates Duane and Mary Minard for rescuing a mariner in distress, backing up by calling in outside assistance, and attending to the victim's injuries.